Miracle was brought into the shelter by a concerned citizen on February 10th.  She was found in the middle of Rt 97 – Littlestown Pike. As you can see from the picture she was found in very poor condition. She had an upper respiratory infection which had affected her eyes, nasal tract, and lungs. She was immediately tested for Felv/FIV and once the test results were negative a plan of action was set. She was treated with SQ Fluids, oral antibiotics, eye drops, and vitamins. She was kept warm with a heating pad and given a stuffed gingerbread man for comfort. Ginger quickly became her best friend and she curled up and snuggled with him day and night.

As Miracle began to gain her strength, she was given her initial vaccine, dewormed for intestinal parasites and treated topically for fleas and ticks. Each day she grew stronger and stronger. After just a couple short weeks she was strong enough and weighed enough for her spay surgery then placed available for adoption.

On February 27th, Miracle was adopted and went to her forever home where she remains and continues to grow. 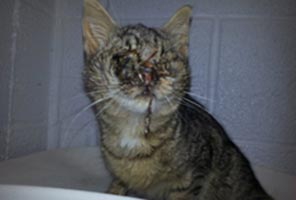